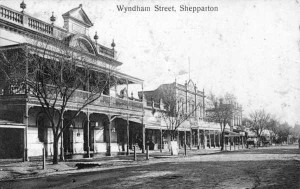 Shepparton is a city of approximately 43,000 including the urban area of Mooroopna.  It is located on the floodplain of the Goulburn River, approximately 181 kilometres north-east of Melbourne.

In the early 1840s it began as a sheep station and river crossing, before undergoing a major transformation as a railway town.  Prior to the European settlement, the area was inhabitated by the indigenous Yorta Yorta tribe known as the Kailtheban.

With the beginning of the gold rush in the 1850s, the area became popular river crossing point for miners travelling to the Ballarat and Bendigo goldfields, as at that time there was no bridge across the Goulburn River.  A punt service was soon set up by Patrick MacGuire to ferry travellers across the river, consequently erecting the town’s first building, the punt house.  This was sold in 1853 and was converted into a hotel, the Emu Bush Inn.  The area became known as MacGuires Punt.

In 1855 the town had also become known as Sheppard town, Sheppardton and Sheparton after the owner of the sheep station.  In 1858 the Post Office was opened and two years later the Governor of Victoria officially declared Shepparton a township.

Today Shepparton is an agricultural and manufacturing centre and is Australia’s largest processor of canned fruits.  It is also the centre of the Goulburn Valley irrigation system, one of the largest centres of irrigation in Australia.

To discover more on the history and heritage of Shepparton click on the link below or visit the Shepparton Museum at:

Other times by appointment